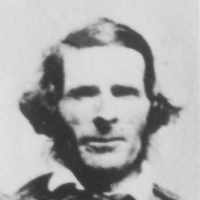 When Robert James "Jimmy" Watkins Jr was born on 11 October 1808, in Byton, Herefordshire, England, United Kingdom, his father, Robert James Watkins Sr, was 29 and his mother, Catherine Mary Allen, was 31. He married Ann Palmer on 24 January 1836, in Callow, Herefordshire, England, United Kingdom. They were the parents of at least 2 sons and 3 daughters. He lived in Pottawattamie, Iowa, United States in 1850. He died on 23 April 1869, in Alpine, Utah, Utah, United States, at the age of 60, and was buried in Alpine Cemetery, Alpine, Utah, Utah, United States.

Put your face in a costume from Robert James "Jimmy"'s homelands.

Robert “Jimmy” Watkins as he was called was born in Herefordshire, England on 11 Oct 1808. His parents were Robert Watkins (who died 8 April 1839 at the age of 61) and Katherine Allen. He married An …