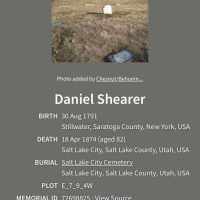 Scottish and English: occupational name for a reaper of standing crops, a sheep shearer, or someone who used shears to trim the surface of finished cloth and remove excessive nap, from Middle English sherer(e) ‘shearer’, an agent derivative of Middle English schere(n) ‘to shear’. Middle English schere denoted shears and scissors of all sizes. Compare Sherman .Americanized form of German or Jewish (Ashkenazic) Scherer or Scherrer , cognates of 1 above. Compare Sharrer .Americanized form of German Scheurer .

Know all whom it may Concern, That I, Daniel Shearer Of Salt Lake City, Salt Lake County, Territory of Utah, Aged 80 years (eighty years) and over, being of sound mind and memory and considering the …