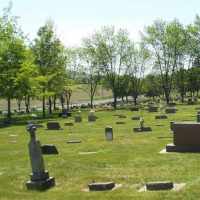 The Life Summary of Cemantha Ann

Put your face in a costume from Cemantha Ann's homelands.

The region that is now Farmington was settled in 1847 by the Haight family, a Mormon pioneer family, that established a farm and an inn. Five more pioneering families migrated to this region in the autumn of 1849. The region developed into an undefined community originally called North Cottonwood Settlement. In 1852, the territorial legislature picked North Cottonwood as the county seat and officially named it Farmington. See also: Farmington, Davis, Utah, United States