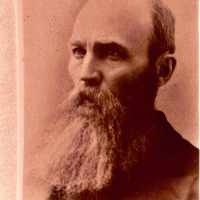 The following biographical information about Daniel Russell appeared on the East Millcreek North Stake website: In the early days of East Millcreek, three families resided on the upper bench of Millc …