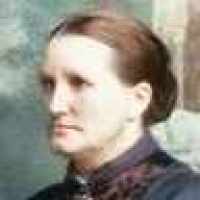 The Life Summary of Drucilla

When Drucilla Theobald was born on 22 October 1842, in Weston, Isle of Wight, Hampshire, England, United Kingdom, her father, William Theobald, was 29 and her mother, Martha Lane, was 26. She married Thomas Passey on 4 August 1858, in Salt Lake City, Salt Lake, Utah, United States. They were the parents of at least 7 sons and 6 daughters. She lived in Strensham, Worcestershire, England, United Kingdom in 1841 and Farmington, Davis, Utah, United States in 1860. She died on 25 October 1916, in Bear Lake, Idaho, United States, at the age of 74, and was buried in Paris Cemetery, Paris, Bear Lake, Idaho, United States.

Put your face in a costume from Drucilla's homelands.

German and English: from a personal name composed of the ancient Germanic elements theud ‘people, race’ + bald ‘bold, brave’. The English surname represents a learned form, re-created from French Théobald. The usual medieval forms of the name in English and German were Tebald and Tibalt (Old French Teobaud, Tibaut). Compare Dewald and Diebold .

AUTOBIOGRAPHY OF WILLIAM THEOBALD I, William Theobald, born at Freshwater, Isle of Wight, England, March 31, 1813. My Father's name was John Theobald, who was born in Feversham, Kent, England, in t …