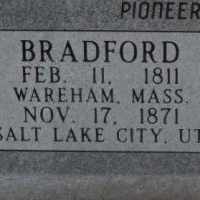 The Life Summary of Bradford

Put your face in a costume from Bradford's homelands.

English; French (Léonard); Walloon (mainly Léonard): from a personal name composed of the ancient Germanic elements leo ‘lion’ (a late addition to the vocabulary of ancient Germanic name elements, taken from Latin) + hard ‘hardy, brave, strong’, which was taken to England by the Normans. A Christian saint of this name, who is supposed to have lived in the 6th century, but about whom nothing is known except for a largely fictional life dating from half a millennium later, was popular throughout Europe in the early Middle Ages and was regarded as the patron of peasants and horses. In North America, the English form of the surname has absorbed cognates from other languages, e.g. Italian Leonardo , Polish, Slovenian, etc. Lenart or Lenard , and probably also their derivatives. Compare Larned , Learned , and Yenor .Irish (Fermanagh): adopted as an English equivalent of Gaelic Mac Giolla Fhionáin or of Langan .German: variant of Leonhard , cognate with 1 above.