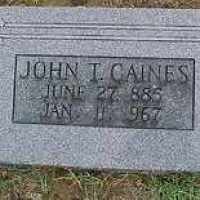 The Life Summary of John T

Put your face in a costume from John T's homelands.

English (of Norman origin): variant of Gain , with post-medieval excrescent -s. In North America, this surname has also assimilated several surnames of Welsh origin, such as Gainous , derived from Gurganus .