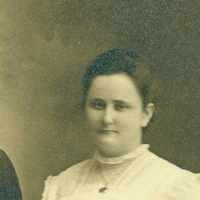 The Life of Nettie Ethel

Put your face in a costume from Nettie Ethel's homelands.

German, Swedish, and English: from a Germanic personal name composed of the elements wald ‘rule’ + heri, hari ‘army’. The personal name was introduced into England from France by the Normans in the form Walt(i)er, Waut(i)er.

Grandma always referred to ice cream as cream. At one family gathering, where homemade ice cream had been prepared, she asked her youngest daughter, Jean for a dish of cream. When Jean handed the di …