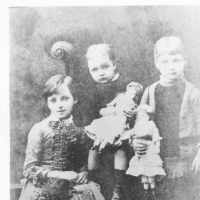 The Life of Agnes Florence Henrietta

Put your face in a costume from Agnes Florence Henrietta's homelands.

Because of a discovery of a £7,000 deficit, City of Glasgow Bank halted operations from November to December 1877. After 10 months after reopening, the bank’s directors announced the bank, itself, had filed bankruptcy. The closure showed a net liability of over £6 million. The bank was so successful with telling people that it wasn’t in error, that the Bank's shares were selling for more than double of what they were actually worth. The bank’s directors were arrested and tried at the High Court. All were found guilty and sentenced to terms of imprisonment. Many Glasgow businesses failed as a result of the bankruptcy and shareholders were called to replenish the bank's losses. One shareholder argued that he had become a shareholder unknowing the fraudulent actions of the bank. Wide effects of the collapse have been seen in limited growth in liability and extensive problems with temporary banking liquidity.
1884