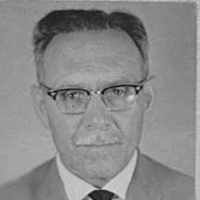 When Redolfo Benites Ortega was born on 13 December 1911, in Avelanoso, Vimioso, Bragança, Portugal, his father, Manoel dos Anjos Ortega, was 40 and his mother, Maria de Jesus Benites, was 29. He had at least 2 sons and 1 daughter with Irene Rocha. He died on 7 July 1985, in Mogi das Cruzes, São Paulo, Brazil, at the age of 73.

Put your face in a costume from Redolfo's homelands.