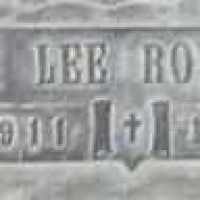 The Life of Lee Roy

Put your face in a costume from Lee Roy's homelands.

Like the Boy Scouts of America, The Girl Scouts is a youth organization for girls in the United States. Its purpose is to prepare girls to empower themselves and by acquiring practical skills.
1930 · Carlsbad Caverns Established

Carlsbad Caverns in Carlsbad, New Mexico, became a National Park on May 14, 1930. Tourists can explore the caverns through guided and self-guided tours. In the 1960's, an amphitheater opened and started where tourists can sit and watch as the bats exit the cave for the night. The only part of the caverns that is off limits to tourists is where the bats come out.