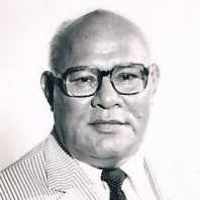 The Life of Aualamalefalelima Eti

When Aualamalefalelima Eti Alesana was born on 4 June 1924, in Vaitogi, Tualauta, Western, American Samoa, his father, James Alesana Fai'ivae, was 48 and his mother, Vaoita Iosefa Mala'itai, was 37. He married Pitolua Aniva Ah-Hang Alesana about 1947, in Samoa. They were the parents of at least 2 sons. He lived in American Samoa in 1999. He died on 17 March 1999, in Upolu, Samoa, at the age of 74, and was buried in Lalomalava, Samoa.

Put your face in a costume from Aualamalefalelima Eti's homelands.

American Samoa is devestated by a hurricane. Olosega, in the Manua Islands, suffered the most. The Navy Department gave the Territory 50 tons of rice, 10 tons of salmon and 15 tons of biscuits.
1939

U.S. troops stationed in Western Samoa during World War II, but no battles are fought on the islands.
1962

Western Samoa becomes independent, the first Pacific island nation to do so.