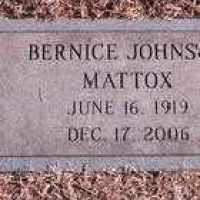 The Life of Bernice Dezma

Put your face in a costume from Bernice Dezma's homelands.

The Prohibition Era. Sale and manufacture of alcoholic liquors outlawed. A mushrooming of illegal drinking joints, home-produced alcohol and gangsterism.
1941 · Pentagon is Built in Arlington

The Pentagon was developed as the Department of Defense had outgrown the other buildings were it was previous located.The groundbreaking for the Pentagon was on September 11, 1941. When the Pentagon was being built, it was determined that it could be no taller than four stories high. Colonel Leslie R. Groves was the supervisor of the project, he would later become known for helping on the Manhattan Project.
1942 · The Japanese American internment