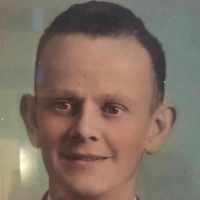 The Life of John Edward Graham

When John Edward Graham Theron was born on 30 July 1920, in Pretoria, Tshwane, Gauteng, South Africa, his father, Jacob Benjamin Philippus Theron, was 33 and his mother, Jessie Alice Burroughs, was 27. He married Eileen Robinson in South Africa. He died on 1 April 1982, in Somerset West, Cape Province, South Africa, at the age of 61.

Put your face in a costume from John Edward Graham's homelands.