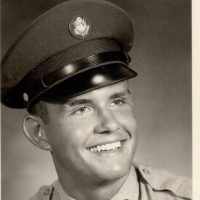 The Life of Larry James

When Larry James Schenkel was born on 13 March 1939, in Hays, Ellis, Kansas, United States, his father, Alexander Schenkel, was 38 and his mother, Meta Bisterfeldt, was 27. He had at least 4 daughters with Judith M Cunningham. He died on 10 September 2009, in his hometown, at the age of 70, and was buried in La Crosse Cemetery, La Crosse, Rush, Kansas, United States.

Put your face in a costume from Larry James's homelands.

Brown v. Board of Education of Topeka was a U.S. Supreme Court case which ruled racial segregation in public schools as unconstitutional. The unanimous decision was handed down on May 17, 1954. The case was originally filed by the Brown family in Topeka, Kansas.
1958 · The First U.S. Satellite in Space