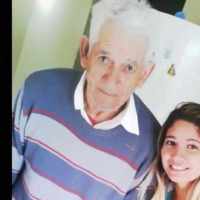 The Life Summary of Turibio

When Turibio Miranda Leite was born on 1 January 1931, in Ortigueira, Paraná, Brazil, his father, Sabino Teixeira leite, was 42 and his mother, Maria de Jesus Miranda, was 4. He married Etelvina Betim. They were the parents of at least 1 son. He died on 4 October 2016, in his hometown, at the age of 85.

Put your face in a costume from Turibio's homelands.