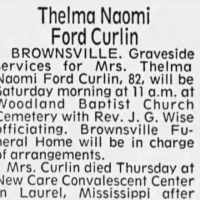 The Life of Thelma Naomi

Put your face in a costume from Thelma Naomi's homelands.

Being modeled after the Boy Scout Association in England, The Boy Scouts of America is a program for young teens to learn traits, life and social skills, and many other things to remind the public about the general act of service and kindness to others.
1916 · Mississippi State Sanatorium for TB is Established

The Mississippi State Sanatorium is a hospital used for tuberculosis patients. This lasted from 1918 to the 1950s. The Sanatorium has now been turned into a museum.
1931

1 English: topographic name for someone who lived near a ford, Middle English, Old English ford, or a habitational name from one of the many places named with this word, such as Ford in Northumberland, Shropshire, and West Sussex, or Forde in Dorset.2 Irish: Anglicized form (quasi-translation) of various Gaelic names, for example Mac Giolla na Naomh ‘son of Gilla na Naomh ’ (a personal name meaning ‘servant of the saints’), Mac Conshámha ‘son of Conshnámha ’ (a personal name composed of the elements con ‘dog’ + snámh ‘to swim’), in all of which the final syllable was wrongly thought to be áth ‘ford’, and Ó Fuar(th)áin ( see Foran ).3 Jewish: Americanized form of one or more like-sounding Jewish surnames.