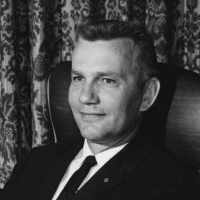 The Life of Orville Lester

Put your face in a costume from Orville Lester's homelands.

The flag of the State of Kansas was adopted on September 24, 1927. The flag was designed by Hazel Avery in 1925.
1947 · The Presidential Succession Act

North German: from Middle Low German vōt ‘foot’, hence most probably a nickname for someone with some peculiarity or deformity of the foot, but perhaps also a topographic name for someone who lived at the foot of a hill.