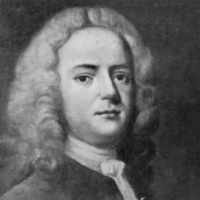 The Life Summary of Garret

When Garret Wellesley 1st Earl of Mornington was born on 19 July 1735, in Diocese of Dublin, Leinster, Ireland, his father, Richard Wesley 1st Baron Mornington, was 45 and his mother, Elizabeth Sale Baroness of Mornington, was 37. He married Anne Hill-Trevor on 6 February 1759, in Dangan Castle, County Meath, Ireland. They were the parents of at least 5 sons and 3 daughters. In 1764, at the age of 29, his occupation is listed as 1st professor of music, trinity college in Dublin, Ireland. He died on 22 May 1781, in Kensington, Middlesex, England, at the age of 45, and was buried in Mayfair, London, England, United Kingdom.

Put your face in a costume from Garret's homelands.

Gregorian calendar was adopted in England in 1752. That year, Wednesday, September 2, 1752, was followed by Thursday, September 14th, 1752, which caused the country to skip ahead eleven days.

The Seven Years' War began as a North American conflict then stretched between England and France. England, along with allies, battled France in America, India, and Europe, making it arguably the first global war. The conflict ended with the signing of the Treaty of Paris in 1763 and England was victorious. The Seven Years' war ultimately led to discontent in the colonies and the American Revolution.

English: habitational name from Wellesley Farm near Wells (Somerset). The placename probably derives from the genitive case of Old English wella ‘spring, stream’ + lēah ‘woodland clearing’. It was later interpreted as ‘woodland belonging to (the town of) Wells’.