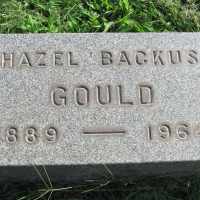 The Life of Hazel Ruth

Put your face in a costume from Hazel Ruth's homelands.

This Act tried to prevent the raising of prices by restricting trade. The purpose of the Act was to preserve a competitive marketplace to protect consumers from abuse.
1890 · The Arcade

The Arcade is a cross between a lighted court and a shopping street and was modeled after the Galleria Vittorio Emanuele II in Milan, Italy. It was built by the Detroit Bridge Co. and it’s one of the few remaining arcades of its kind in the United States. The structure comprises of two nine-story towers with a skylight and was completely financed by John D. Rockefeller, Marcus Hanna, Charles F. Brush and several other wealthy Clevelanders. In 2001, the Hyatt corporation redeveloped the Arcade into Cleveland's first Hyatt Regency hotel but with the two lower floors of the atrium area remain open to the public with retail merchants and a food court.
1909 · The NAACP is formed

1 English: from Middle English bakehous ‘bakehouse’ (Old English bæchūs), hence a topographic name for someone who lived or worked in a bakery. See also German Backhaus .2 Lithuanian (Bačkus): from Lithuanian bačka ‘barrel’, ‘cask’, hence either a nickname for a short, fat man or an occupational name for a cooper.