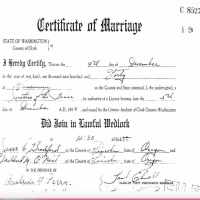 The Life of Jesse Corwin

Put your face in a costume from Jesse Corwin's homelands.

The Oregon Historical Society was founded on December 17, 1898, for the “collection, preservation, exhibition, and publication of material of a historical character, especially that relating to the history of Oregon and of the United States.”
1906 · Saving Food Labels

English: habitational name from any of the many places, large and small, called Bradford; in particular the city in West Yorkshire, which originally rose to prosperity as a wool town. There are others in Derbyshire, Devon, Dorset, Greater Manchester, Norfolk, Somerset, and elsewhere. They are all named with Old English brād ‘broad’ + ford ‘ford’.