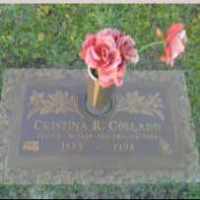 The Life of Cristina

When Cristina Collado Ramos was born on 16 November 1885, in Yauco, Puerto Rico, her father, Buenaventura Collado y Camacho, was 29 and her mother, Cristina Ramos, was 36. She married Andrés Rodríguez Pérez about 1916. They were the parents of at least 6 sons and 3 daughters. She died on 22 November 1998, in Deltona, Volusia, Florida, United States, at the age of 113, and was buried in Deltona, Volusia, Florida, United States.

Put your face in a costume from Cristina's homelands.

Statue of Liberty is dedicated.
1898

Under the Treaty of Paris, Puerto Rico is ceded by the Spanish to the U.S. at the end of the Spanish-American War.
1916 · The First woman elected into the US Congress