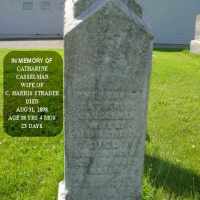 Americanized or older spelling of the German habitational name Kasselmann, denoting someone from Kassel ( see Kassel ), or Kesselman .