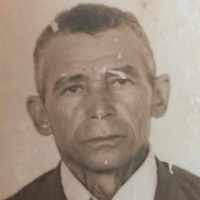 The Life of Francisco Mendes de

When Francisco Mendes de Oliveira was born about 1927, in Conceição do Coité, Bahia, Brazil, his father, Elpidio Ipifanio de Oliveira, was 47 and his mother, Enedina Gracinda de Jesuis, was 47. He married Maria Josefa de Oliveria in Conceição do Coité, Bahia, Brazil. They were the parents of at least 1 son. He died on 7 August 1991, in his hometown, at the age of 64.

Put your face in a costume from Francisco Mendes de's homelands.

There are no historical documents attached to Francisco Mendes de.