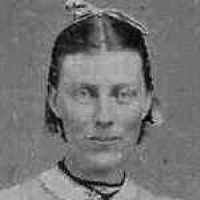 The Life of Ammazetta Jolly

Put your face in a costume from Ammazetta Jolly's homelands.

On January 24, 1848, gold was found at Sutter’s Mill in Coloma, California, which began the California gold rush. In December of that same year, U.S. President James Polk announced the news to Congress. The news of gold lured thousands of “forty-niners” seeking fortune to California during 1849. Approximately 300,000 people relocated to California from all over the world during the gold rush years. It is estimated that the mined gold was worth tens of billions in today’s U.S. dollars.
1854 · The Creation of the Republican Party