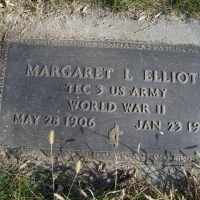 The Life of Margaret L.

Put your face in a costume from Margaret L.'s homelands.

The first act prohibiting monetary contributions to political campaigns by major corporations.
1914 · The Man With The First Air Conditioned Home

Charles Gates was the first person in the United States to install air conditioning in his home. Funny thing was, Gates died a year before it was installed.
1931