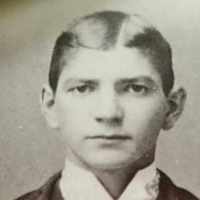 The Life of Emanuele

Emanuele Molini was born in February 1872, in Montoggio, Genova, Liguria, Italy as the son of Lorenzo and Teresa Truca. He married Candida Barchi on 8 January 1893, in Manhattan, New York City, New York, United States. They were the parents of at least 4 daughters. He died in 1948, in Newark, Essex, New Jersey, United States, at the age of 76.

Put your face in a costume from Emanuele's homelands.