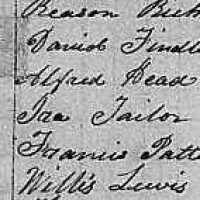 The Life of Alfred Ralph

Put your face in a costume from Alfred Ralph's homelands.

The Revolutionary War ended with the signing of the Treaty of Paris which gave the new nation boundries on which they could expand and trade with other countries without any problems.
1786 · Shays' Rebellion

Caused by war veteran Daniel Shays, Shays' Rebellion was to protest economic and civil rights injustices that he and other farmers were seeing after the Revolutionary War. Because of the Rebellion it opened the eyes of the governing officials that the Articles of Confederation needed a reform. The Rebellion served as a guardrail when helping reform the United States Constitution.
1800 · Movement to Washington D.C.

English (chiefly Kent): from Middle English heved ‘head’, applied as a nickname for someone with some peculiarity or disproportion of the head, or a topographic name for someone who lived on a hill or at the head of a stream or valley. This surname has long been established in Ireland.