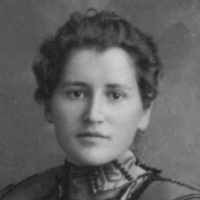 The Life of Melina Amelia

Put your face in a costume from Melina Amelia's homelands.

This Act was to restrict the power of the President removing certain office holders without approval of the Senate. It denies the President the power to remove any executive officer who had been appointed by the president with the advice and consent of the Senate, unless the Senate approved the removal during the next full session of Congress. The Amendment was later repealed.
1884 · Iron Mining starts in Minnesota

After discovering iron ore in the Vermilion Range in North-East of Minnesota, iron mining companies began to come to the area and caused an economic boom to the area of Duluth and to the state as a whole.
1890 · The Sherman Antitrust Act

Her name at baptism was listed as Melina according to the baptism records of St. Patrick's, Chateaugay, Franklin Co. New York. According to those records she was born 24 Feb 1866 and baptized on 11 Ma …