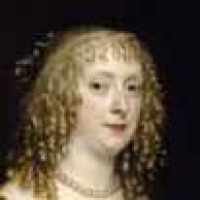 When Catherine Bruce Countess of Dysart was born in 1605, in Clackmannan, Clackmannanshire, Scotland, United Kingdom, her father, Colonel Norman Bruce, was 35 and her mother, Janet Norvall, was 30. She married William Murray 1st Earl of Dysart on 15 April 1613. They were the parents of at least 4 daughters. She died on 22 May 1651, in Dysart, Fife, Scotland, United Kingdom, at the age of 46.

Scottish and English (of Norman origin): habitational name from a place in Normandy which has not been certainly identified. Traditionally, it is believed to be derived from Brix near Cherbourg, but Le Brus in Calvados and Briouze in Orne have also been proposed as candidates.