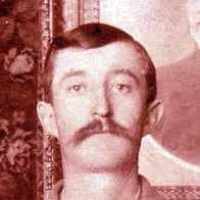 The Life of Fred White

Put your face in a costume from Fred White's homelands.

A minor battle of the American Civil War named The Battle of Baxter Springs was fought in Baxter Springs on October 6, 1863. The battle was a Confederate victory and there were approximately 113 casualties.
1882 · The Chinese Exclusion Act

Anglo-Saxon: Smidh, anyone who strikes with a hammer, an artificer, a carpenter, a smith, a workman