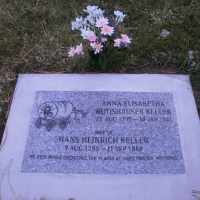 The Life Summary of Johann Heinrich

When Johann Heinrich Keller was born on 9 August 1795, in Weinfelden, Thurgau, Switzerland, his father, Isaac Keller, was 35 and his mother, Anna Magdalena Ammann, was 26. He married Anna Elisabetha Rutishauser on 6 December 1821, in Weinfelden, Thurgau, Switzerland. They were the parents of at least 4 sons and 3 daughters. He died on 10 September 1860, in Quealy, Sweetwater, Wyoming, United States, at the age of 65, and was buried in Ogden City Cemetery, Ogden, Weber, Utah, United States.

Put your face in a costume from Johann Heinrich's homelands.

Susette and John Keller from Switzerland to Utah by Susette

John Keller and Susette Haffter by Susette Haffter Keller, started 1857 Introduction: Just a few remarks, but sweet memories of days of extreme happiness and the knowledge of how affectionately …