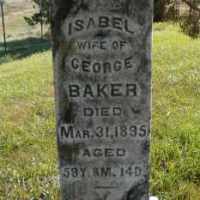 The Life of Isabelle Elizabeth

Put your face in a costume from Isabelle Elizabeth's homelands.

On April 26, 1838, The Lord reveals that the name of His Church should be The Church of Jesus Christ of Latter-day Saints. This revelation was given to the Prophet Joseph Smith, Jr. in Far West, Missouri.
1860

Northern Irish: Anglicized form of Gaelic Mac Coluim ‘son of Colum’. See McCallum , which is the usual spelling of this name in Scotland.

Isabel (McCollum) Baker was the daughter of Elizabeth (Slater) & Stephen S. McCollum. Isabel married first to Wiley Baker, b. 1830; d. ca 1855. They had a son, Stephen Baker. She married 2nd to Ge …