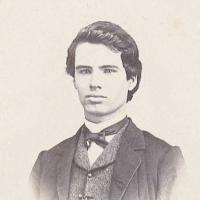 The Life of John B.

Put your face in a costume from John B.'s homelands.

English: topographic name for someone who lived by or in a marsh or fen, Middle English mershe (Old English mersc), or a habitational name from any of various minor places named with this word, for example in Shropshire and Sussex.