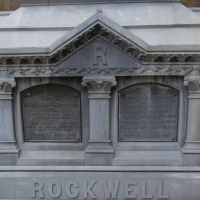 When Capt Samuel Rockwell was born on 19 January 1728, in East Windsor, Hartford, Connecticut Colony, British Colonial America, his father, Joseph Rockwell Jr., was 32 and his mother, Hannah Huntington, was 33. He married Hepzibah Pratt about 1758, in British Colonial America. They were the parents of at least 8 sons and 1 daughter. He registered for military service in 1775. He died on 24 September 1794, in Colebrook, Litchfield, Connecticut, United States, at the age of 66, and was buried in Colebrook, Litchfield, Connecticut, United States.

English: habitational name from places in Buckinghamshire and Somerset. The former was earlier Rockholt, and was so named from Old English hrōc ‘rook’ (perhaps a byname) + holt ‘wood’. The second element of the Somerset place is probably (and more predictably) Old English well(a) ‘spring’, ‘stream’ ( see Well ).