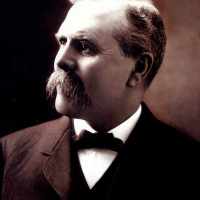 The Life of Joseph Clark

Put your face in a costume from Joseph Clark's homelands.

English (southeastern): topographic name arising from a misdivision of Middle English atten (e)ye which means either ‘at the river’ or ‘at the island’, from Old English ēa ‘river’ and ēg ‘island’ respectively. Both these words were feminine in Old English, and so should have been preceded only by Middle English atter ( see Rye ), but distinctions of gender ceased to be carefully maintained in the Middle English period.