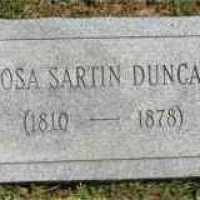 The Life of Rosa

English: nickname from Old French certeyn ‘self-assured’, ‘determined’. (The phonetic change of -er- to -ar was a normal process in Middle English).

Meeting of Joshua and Rosa

Posted 01 Feb 2012 by Wayne King Joshua and Rosa Sartin (sometimes spelled ‘Sartain’) met at a river. Joshua was driving horses – possibly for the Army. Rosa stopped to admire his horses, and th …