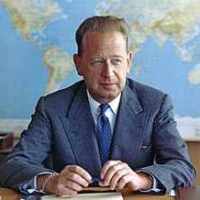 When Dag Hjalmar Agne Carl Hammarskjöld was born on 29 July 1905, in Kristina, Jönköping, Jönköping, Sweden, his father, Knut Hjalmar Leonard Hammarskjöld, was 43 and his mother, Agnes Maria Karolina Almqvist, was 39. He immigrated to New York City, New York, United States in 1949. He died on 18 September 1961, in Stockholm, St. Lawrence, New York, United States, at the age of 56, and was buried in Uppsala, Sweden.

Put your face in a costume from Dag Hjalmar Agne Carl's homelands.