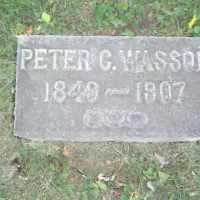 The Life of Peter Calvin

Put your face in a costume from Peter Calvin's homelands.

Due to the state’s financial crisis during the previous decade and growing criticism toward state government. Voters approve the Constitution of 1851 which forbade the state government from going into debt.
1860 · Ohio supports the Union side of the Civil War

Although divided as a state on the subject of slavery, Ohio participated in the Civil War on the Union's side, providing over 300,000 troops. Ohio provided the 3rd largest number of troops by any Union state.
1865