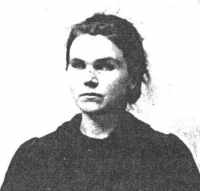 English: nickname for someone who had done well for himself by marrying the daughter of a prominent figure in the local community, from Middle English odam ‘son-in-law’ (Old English āðum).