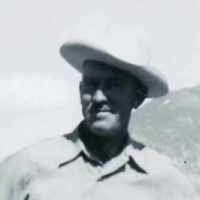 The Life of Everett Edward

Put your face in a costume from Everett Edward's homelands.

Irish (of Norman origin): habitational name from any of various places in Normandy and Picardy, France, named Canteloup or Canteleu, from Old Norman French cante(r) ‘to sing’ + lou, leu ‘wolf’. These appear originally to have been grimly humorous names denoting settlements where the wolves could be heard howling in the uncleared woods around. Compare Italian Cantalupo .