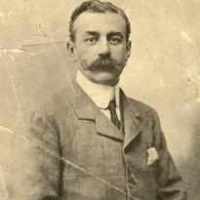 The Life of Jean Baptiste Aymon

When Prince Jean Baptiste Aymon De Faucigny-Lucinge was born on 30 May 1862, in Paris, Île-de-France, France, his father, Prince Louis Charles Rodolphe De Faucigny-Lucinge, was 34 and his mother, Henriette Victorine Amanda De Mailly-Nesle, was 30. He married Carolyn Salome Foster on 2 July 1913, in London, England, United Kingdom. He died on 1 August 1922, in Saint-Biez-en-Belin, Sarthe, Pays de la Loire, France, at the age of 60.

Put your face in a costume from Jean Baptiste Aymon's homelands.

Champs-Élysées is over 6,000 feet long and over 200 feet wide. The name is French for Elysian Fields were in Greek mythology was the paradise for the dead heroes. It is one of the oldest avenues in France and is also the location of the Arc de Triomphe.
1870

Franco-Prussian war resulted in the loss of Alsace and Lorraine and the fall of Napoleon III. Paris Commune (1871).
1886 · The Statue of Liberty

The Statue of Liberty that is in France is identical to the one that sits in New York. The Statue was sent over from France. It symbolizes the alliance between the two countries. The French have nicknamed it the Laboulaye Lady