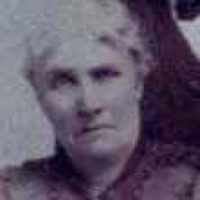 English: probably an occupational name for someone who worked at a ‘church house’ (Middle English chirche + h(o)us), a building, usually adjoining the church, which served as a parish room.