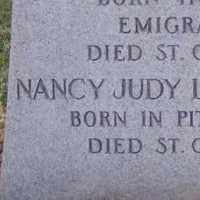 Perhaps an Americanized spelling of the French surname Judet, from a pet form of Jude .