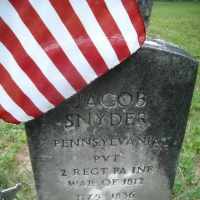 The Declaration of Independence was signed in Philadelphia on July 4, 1776. The liberty bell was first rung here to Celebrate this important document.
1791

German and Jewish (Ashkenazic): occupational name for a tailor, literally ‘cutter’, from Middle High German snīder, German Schneider, Yiddish shnayder. The same term was sometimes used to denote a woodcutter. This name is widespread throughout central and eastern Europe.