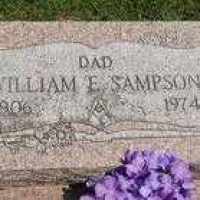 The Life of William Elisha

Put your face in a costume from William Elisha's homelands.

The first act prohibiting monetary contributions to political campaigns by major corporations.
1913 · The Completion of the Keokuk Dam

A Greek form of the scriptural name, which has been translated from "shémesh," the sun, as "illustrious sun," "splendid sun" (great joy and happiness), "solar, like the sun," and "one who resembles the sun"