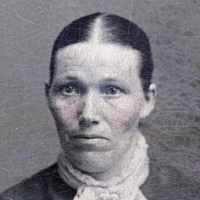 When Hanora Manning was born on 1 October 1835, in Ireland, her father, Edward Manning, was 39 and her mother, Mary Lavelle, was 39. She married Michael Lally in October 1855, in Macclesfield, Cheshire, England, United Kingdom. They were the parents of at least 5 sons and 2 daughters. She died on 22 May 1899, in Winchester, Cheshire, New Hampshire, United States, at the age of 63.

Put your face in a costume from Hanora's homelands.

Being a monumental event in the Texas Revolution, The Battle of the Alamo was a thirteen-day battle at the Alamo Mission near San Antonio. In the early morning of the final battle, the Mexican Army advanced on the Alamo. Quickly being overrun, the Texian Soldiers quickly withdrew inside the building. The battle has often been overshadowed by events from the Mexican–American War, But the Alamo gradually became known as a national battle site and later named an official Texas State Shrine.
1839

The Night of the BIG WIND. In Killarney and its neighborhood there was a terrible hurricane. The town sustained much damage and many houses were shattered.
1863

1 English: patronymic from Mann 1 and 2.2 Irish: adopted as an English equivalent of Gaelic ÓMainnín ‘descendant of Mainnín’, probably an assimilated form of Mainchín, a diminutive of manach ‘monk’. This is the name of a chieftain family in Connacht. It is sometimes pronounced Ó Maingín and Anglicized as Mangan .