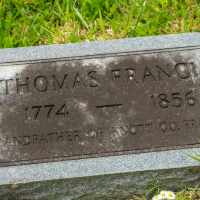 "Patrick Henry made his ""Give me Liberty or Give me Death"" speech in Richmond Virginia."
1792 · Becomes the 15th State

On June 1, 1792, Kentucky became the 15th state. It was the first state west of the Appalachian Mountains
1796 · Wilderness Road Opens to Wagons

1 English: from the personal name Francis (Old French form Franceis, Latin Franciscus, Italian Francisco). This was originally an ethnic name meaning ‘Frank’ and hence ‘Frenchman’. The personal name owed much of its popularity during the Middle Ages to the fame of St. Francis of Assisi ( 1181–1226 ), whose baptismal name was actually Giovanni but who was nicknamed Francisco because his father was absent in France at the time of his birth. As an American family name this has absorbed cognates from several other European languages (for forms, see Hanks and Hodges 1988 ).2 Jewish (American): an Americanization of one or more like-sounding Jewish surnames, or an adoption of the non-Jewish surname.