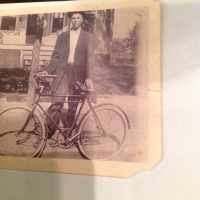 English: metonymic occupational name for a maker or user of bellows. See Bellow .