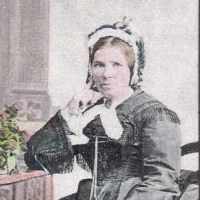 When Mary Ferguson was born on 30 October 1816, in Perthshire, Scotland, her father, John Ferguson, was 33 and her mother, Helen Clark, was 34. She married James Christie on 19 April 1839, in Perthshire, Scotland. They were the parents of at least 4 sons and 1 daughter. She died on 8 November 1895, in Dunedin, Otago, New Zealand, at the age of 79, and was buried in Otago, New Zealand.

The town of Paihia, within the inner reaches of the Bay of Islands, experienced growth at the hands of the Church Missionary Society. A mission was established in 1823, which led to the creation of the country's first printing press in 1835. The mission closed in 1850.
1825 · The Battle of Te Ika-a-ranga-nui

The Battle of Te Ika-a-ranga-nui was sparked by the murder of Koriwhai of the Ngapuhi tribe by members of both the Ngati Whatua and Ngati Maru tribes. Over 1000 men fought, 700 of which lost their lives. Because of this Battle, many of the Maori tribes stopped eating people because of respect for their fallen neighbors.
1840

The Maori sign the Treaty of Waitangi giving control to the British in exchange for protection and guaranteed Maori possession of their lands.